A Voice for All Seasons 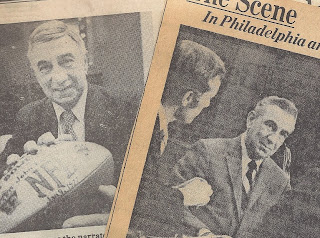 The clippings from 26 years ago -- a long-ago September 27 -- are yellowed, but the memories remain vivid. The headline announced:
"John Facenda dies; eminent anchorman."
There are people, though they age, are of a unique class and so we can't imagine life without them. For lifelong Philadelphians like me, John Facenda was such a man. If you are reading this in Philadelphia, you must remember that John Facenda was the very model of a newsman. Honest. Reliable. Most of all, believable, as in "trustworthy" rather than merely "persuasive," as you might be fooled into thinking a disingenuous person is credible. Put another way, Mr. Facenda was to Philadelphia what Walter Cronkite was to the entire nation. As local writer Clark DeLeon wrote in his tribute to Mr. Facenda 26 years ago, "He brought a dignity to the (broadcasting) industry in its infancy, a dignity we can appreciate better now (at the time of his passing) that we can hardly remember their names six months later."
Has so little really changed in those ensuing 26 years? It seems so. It seems we still have many more Keith Obermanns and Bill O'Reillys and fewer Ed Murrows; more Contessa Brewers and fewer Katherine Grahams.
If you are reading this across the nation, you probably know Mr. Facenda as the first narrator of NFL Films. It is a cliche to say that he was known as "the voice of God." Yet the sobriquet sticks, because no one has come along to supplant him. Indeed, he has proved to be irreplaceable. Legend has it that one night in 1965, Mr. Facenda was watching the slow-motion game sequences on the TV, where happened to be produced by NFL Films, a local firm near Philadelphia. Mr. Facenda was rhapsodizing just how beautiful the visuals were, and he started to improvise narration to go with it.
Ed Sabol, founder of NFL Films, happened to be at the bar. Mr. Facenda recalled that Sabol came up to him and said, "If I give you a script, could you repeat what you just did?"
Mr. Facenda said he would try. And so began his association with NFL Films, which would end 19 years later with his death. (Witness this example in is this clip in which he pays homage to "The Quarterback.")
I was privileged to know John Facenda and work with him. As a communications student at Temple University, I interned at WCAU-TV, Mr. Facenda's station. I worked with him on "Sunday Edition," a local public affairs program. He was unfailingly courtly and always professional. Just hearing him say hello was like listening to a symphony of the voice. He was magnificent. But I must admit that I related to him as a fellow Italian American. In those days, our people did not always have positive role models, especially in the media. Most portrayals of Italians consisted of thick-tongued thugs in gangster movies. But Mr. Facenda represented the best of us who appreciate language, especially the English language that his father drilled into him and his siblings with flash cards around the kitchen table. It was there he learned his elocution that served him so well.
This begged an inevitable question from me. "John," I was once asked him, "you came into the business when everyone's name was homogenized. But you kept your ethnic name. Were you ever asked to change it?"
His eyes flared and his demeanor changed to one I had never seen. "Yes, Pat, they DID want me to change my name." His usually controlled voice began to rise in indignation over a long-ago insult that was suddenly remembered. "They want me to change my name to John Foster. John Foster! Can you imagine that, Pat? And that's when I told them in no uncertain terms to go fuck themselves!"
My jaw dropped. I had never heard John say "damn" or "hell," so the F-bomb was unimaginable. But that was indicative of his pride in his Italian heritage. My own first name is Pasquale, and though I use "Pat" for the ease of pronunciation, I never shrink from acknowledging my real name. So Mr. Facenda's own pride struck a chord that resonates with me today.
In the 26 years since he departed us, I think of him often. I remember him as a nobly professional co-worker who gave magic to whatever feeble words this callow young man gave him to say. I remember him as the authoritative voice who ruled, first, the local airwaves and, later, the cinematic gridiron. But most of all, I remember his avuncular warmth, which came through the image orthicon tubes that sat in countless Philadelphia homes. He ended every broadcast with his signature sign-off: "Have a nice night tonight and a good day tomorrow. Goodnight, all."
Think of him whenever you see local and national anchors missing cues and inserting themselves into the news they are covering. Then think about just how much we have lost over the last 26 years, and probably for ever more.

Email ThisBlogThis!Share to TwitterShare to FacebookShare to Pinterest
Labels: In the Course of Public Discourse - IN MEMORIAM, Media Matters, Miscellania 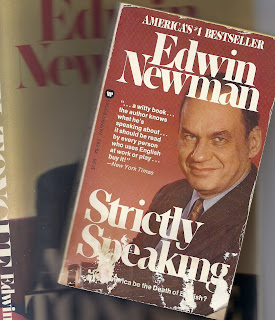 As a communicator, author and overall lover of language, I pause to honor the life and legacy of Edwin Newman.The NBC newscaster and author passed on August 13 in Oxford, England -- a suitably academic ambiance for such a learned man, though on the other hand, he may have found it a stuffy setting.
Mr. Newman seemed to have lived two famous lives. One was the award-winning broadcaster who was often called on to deliver sad news with the gravity it deserved. Examples were the assassinations of President Kennedy (on radio) and Rev. Martin Luther King (on television).
The other was as the guardian of sound speech. He was the grammatical gadfly who spent much time and effort reminding us of the value of the proper use of language.
While I looked to him as a role model as I prepared for a career in broadcasting, it was really his crusade for clear language that caught my attention. His two most famous books, Strictly Speaking and A Civil Tongue, were published in 1974 and 1976, respectively. It may be hard to imagine, but they really got U.S. citizens to discuss their language. (The subtitle of Strictly Speaking was "Will America be the death of English?")
The Philadelphia Bulletin called it "a mighty important book. (Newman) spares no one in criticizing the poor way we speak and write." The Chicago Tribune called it "relentlessly funny."
True and true. But the books were also social phenomena of their times. Talk shows were devoting entire episodes to this subject. I remember one lively panel discussion on The Tomorrow Show with Tom Snyder. I know it featured a really good panel, although the only person I remember 35 years later was Abe Burrows, lyricist for Guys and Dolls and other Broadway shows. I remember Burroughs said that once you could tell someone that their work was "pretty good," and that was a real compliment. By the mid-1970s, it was damning with faint praise to say someone was pretty good. So Burroughs observed the word inflation that plagues us still today. (A side note: How do we give someone proper praise when a standing ovation is standard for such non-luminaries as the judges on American Idol?" Just asking....)
I also learned that night that linguists could find an inverse link between the decline of German literature and the rise of Nazism. Observe the state of political discourse in this country, and I will dare you not to be discouraged.
Other people have made more fatuous observations on our use and misuse of language. The great George Carlin liked to joke about oxymora such as"jumbo shrimp" and "military intelligence." But Newman was actually more trenchant, identifying ridiculous, everyday phrases that people would take for granted. Like the store that trumpets "discounts of up to 40 percent...AND MORE!" Or when a sportscaster praises an up-and-coming running back by saying "he has a great future in front of him."
Mr. Newman's work influenced me profoundly. Not only did I start to notice wasteful language more and more, but I cleaned up my own writing. One piece of evidence of this was when my comprehensive exams for my master's degree was graded "with distinction." Curious, I asked the head of the department what was so special about what I turned in. He responded without hesitation, "Pat, I could read your blue book, and I knew exactly what you were trying to say."
Credit Mr. Newman for that. And I will also credit him for raising the overall standards of American English. As an editor in the corporate world and academia, I see a real improvement in the ways most people express themselves compared to years ago. Documents are more clearly written and not so laden with jargon. I see less bloat, more concision. Also, most corporate speakers are pretty competent, where the opposite used to be the rule.
I thought of Edwin Newman frequently over the years. He had faded from the public eye, but since I had not heard of his death, I had faith that he was still healthy. Still, his obituary this morning struck me with force. But in the end, I took satisfaction in knowing that he had endured (91 years old). I hope that his long life allowed him to see that he was a positive influence on our writing and speaking. I know he was such a force in mine.
I suggest that you treat yourself by picking up one of Edwin Newman's books. I guarantee that you won't be disappointed.

Posted by Pat Rocchi at 7:05 PM No comments: Links to this post

Email ThisBlogThis!Share to TwitterShare to FacebookShare to Pinterest
Labels: In the Course of Public Discourse - IN MEMORIAM, Miscellania, The Write Path
Newer Posts Older Posts Home
Subscribe to: Posts (Atom)