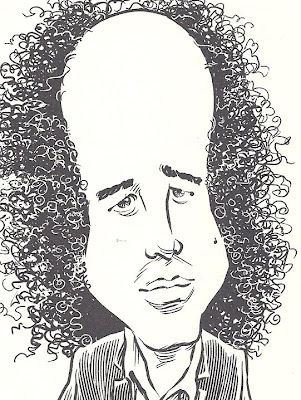 "I remember when the candle shop burned down. Everyone stood around singing 'Happy Birthday.'"
-- Steven Wright
Did you ever consider how much work it takes to write a joke like that?

I was reading a book by Marlo Thomas that my wife gave me for Christmas titled Growing Up Laughing: My Story and the Story of Funny. It is a memoir based on her life as the daughter of legendary comedian and TV star, Danny Thomas. It is mostly about what defines the elusive quality of "funny." It's one of those tomes that's good to read in bed just before the lights go out, as it is not very demanding, and it puts you in a good mood to sleep. Many chapters are Ms. Thomas's interviews with a wide variety of comics and actors, ranging from Tina Fey to Ben & Jerry Stiller to Don Rickles. However, the chapter on comic Steven Wright stopped me in my tracks. While the old veteran Henny Youngman was known as "The King of the One-Liners," Wright deserves that title much more. Youngman more often than not had a long build-up to a powerful punchline. Wright tells his jokes in three sentences at most.
"I had a friend who was a clown.
When he died, all his friends
went to the funeral in one car."
Reading about Wright reminded me how much hard work there is in concise writing. There is an apocryphal story that George Bernard Shaw once told a friend that he wrote him a five-page letter because he didn't have time to write him a one-page letter. Wright says in Thomas's interview that "something in my mind starts to edit down the joke so I can get the point across with the fewest amount of words....I don't like big, long set-ups."
And really, how much do any of us like hearing those same set-ups? Wouldn't you rather have someone get right to the point? So it is with our own writing, especially in speeches.
I relearned that lesson last year when I was in a Toastmaster speech competition. There was one contestant who was quite impressive in her manner, her confidence and her diction. Her speech was very literate, and she delivered it beautifully, with the skill of an actress. However, she didn't even place in the competition, while I came in second with a memoir about the time I had to speak to my son about sex.
After the competition on how well she did in her first contest. (She was in her first year of Toastmasters.) "But I have some advice for you that may help you in the future, " I said. She stopped me before I could continue.
"I think I know what you are going to say," she said to me. "I was struck by the simplicity of your language." And there it was. The audience couldn't quite wrap their heads around her message, while mine was easier to discern.
"I intend to live forever. So far, so good."
One way to learn concision is to seek out and read succinct writing. Hemingway is the master. He once boasted that he could write a novel in just six words:
For Sale:
Baby Shoes.
Never Used.
For a better example, read A Clean, Well-Lighted Place, which one college professor described to me as "the perfect short story. A better example still is Robert Frost's The Death of the Hired Man. In a long poem -- not even a short story -- he lays out the final years of a day laborer in stunningly vivid detail.
"How do you tell when you're out of invisible ink?"
Think about applying such discipline to your own writing. When you are reviewing a piece, try taking out just unnecessary word. Then try a second. Use your Twitter, too. It is amazing what you can get across in just 140 characters. But don't be fooled; just because it's shorter doesn't mean that it's easier.
"I'm writing a book. I've got the page numbers done."
Posted by Pat Rocchi at 4:35 PM 1 comment:

Email ThisBlogThis!Share to TwitterShare to FacebookShare to Pinterest
Labels: Miscellania, Ruminations on My Own Speaking; Getting Your Word Out

One Picture Tells a 118-year-old Story 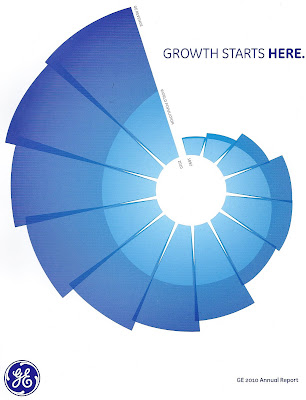 I offer up this graphic from GE's 2010 annual reports as a terrific example of making a point clearly with a single graphic. Inside the front cover, it says that "GE's product and services offerings are aligned with human needs and growth opportunities around the world. As global population has grown over the past 118 years, GE's revenues has grown at an even faster rate."
This cover illustrates the point beautifully. It is clear that the world population, shown by the light blue, is outpaced by the GE revenues, symbolized by the darker blue.
GE's annual reports in recent years have set standards for clear yet concise communication. This graphic is just one example.
You can access this graphic and the whole annual report online by clicking here.
Posted by Pat Rocchi at 12:30 PM No comments: