Getting the Holidays Right 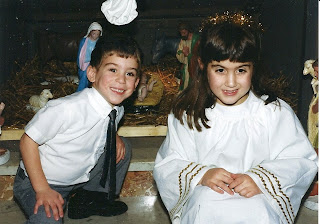 Francis and Julia Rocchi, Christmas, c. 1989
My wife, Marie, and I always tried to de-emphasize the gift-giving aspects of Christmas in favor of the spiritual side and the importance of family. One year, my daughter innocently and inadvertently taught me that we were heading in the right direction.
We lived in upstate New York at the time. A few short days before Christmas, I had to make a run to the mall to pick up some last-minute gifts. There was much to do. We had pageants, Mass and other activities at our church, school and community. We would spend Christmas Day together, just the four of us. Then we would hit the road to be with our families back in Philadelphia. I had very little time that day, but I was able to spare a hour or two to get some final items. I grabbed my daughter Julia, about 7, and we were off.
The mall was amazingly quiet given that it was just before Christmas. Luckily, that allowed me to get what I needed. Julia asked if she could see Santa Claus. Since we had time to spare, it was no problem.
I let her go, and she had Santa all to herself. I observed from a distance, and I could see that she was quite animated, really chatting up the old man, so I could only imagine what kind of booty she wanted for Christmas.
When I went to retrieve her, she went off to see some decorations. I asked Santa privately, out of her earshot, what she asked him for.
"Oh, she didn't ask for anything," he said.
I was taken aback. "She sat with you a long time. What was she talking about?"
"She was telling me all about how you were going to church tonight, how you were going to be together for Christmas and then travel to be with family. Most kids spend their times telling me about what they want. But she was totally focused on family."
Hm. I guess Marie and I got it right that year.
I have been reminded of that story every Christmas since because, I'm sorry to say, our view of the holiday is looking more and more unusual. To say it is about gifts is a cliche. To say that we don't keep Christ in Christmas is even more obvious. But in the end, I don't know if any of us know what this holiday means any more. Perhaps it has come to mean nothing.
When I turn on the television, I see so many images that are unrelated and even random. There are saccharine movies on Showtime or The Hallmark Channel. Cartoon specials about Rudolph the Red-Nosed Reindeer, Frosty the Snowman and The Polar Express. They all add up to...

Nothing in particular. In the end, they do not comprise a unifying image of Christmas. The radio is just as bad, with songs about lists of things that kids want, grown-up lists of things we want, a seductress that wants cash from Kris Kringle, and people being blue because someone they love is not with them for the holiday (Merry Christmas Darling, All I Want for Christmas is You, Blue Christmas, etc.). But why do these people want someone with them at this time of year? Either they don't need to say it out loud because we know intuitively, or they don't say it because they don't know themselves. Karen Carpenter sang that logs on the fire filled her with desire. But desire for what? Why bother?

However, during that one Christmas, our daughter (and later our son, Francis) showed us that we were able to cut through the Yuletide clutter. By taking them to church, singing "Happy Birthday" to Jesus, hearing religious music more than the secular, and showing them many more Nativity scenes than pictures of Santa, we have had a modicum of success in fighting a distinctly myopic view of the holiday. I only hope that we can do the same with other holidays. I like to remember that the Fourth of July and Memorial Day are not just long weekends, but were actually created to honor heroes. But I guess I'll take one battle at a time.

The end-of-year holidays can be significant to all of us, as most of us can find their roots in our individual cultures. I hope you find your own special meaning in these days, and I wish you all health and happiness in the new year.
Posted by Pat Rocchi at 11:42 PM 1 comment:

Email ThisBlogThis!Share to TwitterShare to FacebookShare to Pinterest
Labels: Miscellania, My Life Beyond This Blog

I generally hate to add any negativity to this lovely season, but here goes...

I have come to hate all-Christmas radio broadcasting.

There, I said it. I have become a Christmas Crab on this subject. And believe me, I love Christmas. I sing it every year with my group, A Cappella Pops. I have more CDs than my family care for me to have, and I play them constantly. One of my biggest coups in life was getting a car with a multi-CD play that even scrambles the selections. Oh, Joy! Now I can have a wide variety of Christmas music playing during all of my drive time. (Add this to the long list of things that drive my wife nuts.)
However, my idea of Christmas music is not the same as radio programmers. To me, Christmas is about being with family, and believe it or not, I actually believe it is about celebrating the birth of Christ, the seed of the Christian faith. I believe this just as I regard Hanukkah as the remembrance of a miraculous victory rather than eight days of gift-giving.
Yes, I snap my fingers to Mariah Carey singing "All I Want for Christmas is You," but not once an hour. Once a week will do, thank you. And while I believe that the season is captured in the lovely "O Holy Night," I don't think the song was composed so that Celine Dion could pop several arteries proving she can hit the high note at the end.
Now the all-Christmas stations start their assault on Thanksgiving and stop sharp on midnight of Christmas Day. (By the way, people in Europe treat Christmas as a season, not a one-day event. Hello, the 12 days of Christmas? Anyone hear of that?) That's a long time to endure mind-numbingly bad music, such as "Do They Know It's Christmas," or "Grown-Up Christmas List." And please don't get me started on "Grandma Got Run Over by a Reindeer."
So, excuse me, Radio Programmers, I will pass on your secular selections until you show more awareness of what the season is all about. In the meantime, dear readers, I direct you to a performance of what I regard as one of the greatest Christmas songs of all time, In the First Light, as performed by Glad. Enjoy, and happy holidays.
Posted by Pat Rocchi at 3:00 PM 2 comments:

Email ThisBlogThis!Share to TwitterShare to FacebookShare to Pinterest
Labels: Life In General 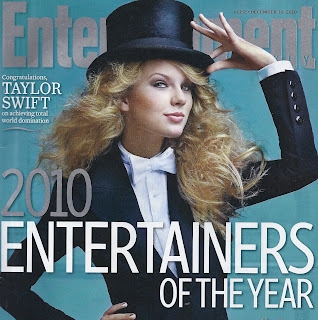 Several years ago, a good friend who lives in the Reading, Pa., area had a visitor to his home. He and his son are both musicians, and a young female friend of the son came to their home. "Would you like to listen to my music?," she asked. "I wrote some songs, and I'd like to play them for you."
He listened, and yes, they were pretty good songs. He also liked the young lady, thinking she was sweet and polite.
A few years later, her parents took a huge leap of faith and moved from Pennsylvania to Nashville to support her dream of being a songwriter. It paid off big, for their daughter, for themselves and for all of us.
The title of this post and the accompanying photo tip my hand, I'm sure. Yes, the young lady in question is Taylor Swift, who has just been named by Entertainment Weekly magazine as the Entertainer of the Year.
I cannot imagine anyone more deserving. Think of her accomplishments in the past year alone: A Grammy for Best Album of the Year, and three more in a variety of categories. A new album, Speak Now, which sold more than a million copies in its first week (PLATINUM IN ONE WEEK!) and for which she wrote all the songs. An appearance in a hit movie, Valentine's Day. Hosting Saturday Night Live, and showing herself to be a pretty capable sketch comedian. A successful tour. Surviving and even deftly handling a zeitgeist moment when rapper Kanye West publicly dissed her at the MTV Video Awards, calling Swift unworthy of her trophy when compared to Beyonce.
Most people view the world through their own prism, and mine tends to communication and marketing. What amazes me most about this artist is the consistency of her vision and her subtle self-confidence. This is most evident in her careful stewardship of her own image and messaging, staying calm in every situation.
Would you argue that she owes that to her handlers? I don't. She stood on that stage alone at the MTV Awards when West dishonored her, and she handled the situation with more grace and restraint than we have the right to expect from a 20-year-old. Also, I was impressed by her calm control during her in the course of her interview with EW. Her expressions were articulate, her words as well-chosen as you would hope from a successful songwriter. She diminished the interviewer's suggestion from others that she saved the music business: "I write music about my life and love and relationships, and...(t)hat's where I have to draw the line as far as what I am and what I am not."
The interviewer also asked how she felt about being linked to Kanye West. She replied, "The one choice that I do have, that I continue to make, is to not talk about it."
The interviewer next asked if she had heard his new record. Underlining her point, she simply replied, "I don't want to talk about him."
End of story. Point well made, Ms. Swift.
I don't own one of her albums, although I listen to her and catch her on the tube when I can. (Let's get real; I'm not part of her target demographic.) But I look forward to watching her grow as an artist and a cultural force. I dare say she is off to an astounding start.

Posted by Pat Rocchi at 6:44 PM No comments:

Email ThisBlogThis!Share to TwitterShare to FacebookShare to Pinterest
Labels: Life In General, Media Matters, Miscellania, Ruminations on My Own Speaking; Getting Your Word Out
Newer Posts Older Posts Home
Subscribe to: Posts (Atom)