DOES THAT SUCK? and Other Questions about Language

I was evaluating a Toastmasters meeting, when a speaker said that a particular situation "sucked."
Hm.
When I presented my report to the club, I asked, "Was that term acceptable to you? I am really asking that question, because I know the root of that expression (in my inside voice: fellatio), and I would not use it. But that could be a generational and cultural bias on my part? What do you think?"
It was an interesting discussion, and the consensus is that "sucks" is the new "stinks" - a previously questionable term that has entered into acceptability.
In another example, Toastmaster magazine published a cover story titled Snafu Survival, about how to protect yourself from unexpected technical problems. I knew that someone would object to "snafu" as a World War II acronym for "situation normal, all fu**ed up." Sure enough, two members wrote to the magazine, asking if the editors really knew the origin of this word and questioned its appropriateness. One said that she would not even display the issue publicly. The editors responded that the dictionary defines this as a perfectly acceptable word.
I believe both instances bring up good lessons about the appropriateness of words. I suggest these guidelines:

Take a look at this photo. Do you see anything wrong with it? You should know that at time in Great Britain, this was the equivalent of the middle finger. However, I think you can safely make the gesture today. Though I don't know why you would find it useful.
Posted by Pat Rocchi at 12:45 PM 2 comments: Links to this post 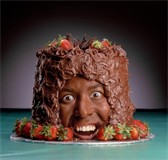 So today is my birthday, and I was having breakfast with my friend, Ralph. We were commiserating about the state of our lives, and we both reminisced about the times we were very successful losing pounds on Weight Watchers©. I turned to Ralph and said, "I have been thinking about going back to Weight Watchers. Would you go with me?"
He agreed, and after breakfast, we drove to the mall and signed up. Our first meeting is 10:00 a.m. tomorrow. (No, we did not procrastinate. The next available meeting today was not for another three hours and would have killed our schedule for the day.)
A positive change made in a matter of minutes.
Question: Why can't I do that all the time?
Answer: I can. The difference is that today was the rare day when I resolved to make that change immediately.

Posted by Pat Rocchi at 11:58 AM No comments: Links to this post

An Open Letter to Recruiters: It is Time to Treat Job Seekers with Dignity

How are job-seekers being treated by employers and their surrogates, such as HR departments and recruiters, in this difficult economy ? Here is a glimpse, in the form of an open letter from a job candidate who had enough.
First, the scenario: An out-of-work senior professional I know applied for a job at an East Coast health care chain. The organizational recruiter requested a phone interview him, and he accepted, adjusting his schedule to spend an hour with her. After hearing his credentials, the recruiter was interested enough to ask for more information in the form of examples of the candidate's work in that field. "Send me the work samples," she requested, "and I will share them with the hiring manager. He'll be back next week, and I will get back to you to tell you how we will go forward."The candidate prepared a detailed portfolio and e-mailed it to the recruiter. Time passed. First one week. Then another. The candidate was patient, until a month passed. Then he corresponded with the recruiter and received this response by email:


"Thank you so much for your time and additional information on your background for the position at (local employer).  At this time, the Executive team has decided to move forward with an internal candidate.  We will keep your information on file for future roles."

This was a day when the candidate had had enough, and he sent back this e-mail:


"As a job hunter, please let me give you some input for you and your peers:

"After I gave you my time and responded to your request for a portfolio as a follow up, I would have appreciated knowing of this development. There are many of us out here trying to get work in a difficult economy, and it is disheartening to spend our time and make a great deal of effort only to be left hanging, made to wonder what is happening next."It is apparent that even after all the initiative I put into this opportunity, I would not have heard from (local employer) if I had not circled back. And I am quite familiar with your position. In my own role as a business leader, I have built and rebuilt teams over the years by seeking out and interviewing many people. I have called prospective candidates and even vendors back to give them closure and to thank them for attempts to work with me. In this era of instant, electronic communication, not using a simple e-mail, even one that is automated, is an oversight and a slight."I urge you and others in your discipline to remember that there are real, live people on the other end of these applications and interviews. It would be helpful to their psyches if more employers and their recruiters kept these folks and their pain in mind."

I'm glad that my friend got this off his chest, as he speaks for all job seekers who are being treated poorly. We have reached a point in this business world where employees and potential employees are regarded as one more piece of capital, as costly and expendable as last year's model of the fax machine, and  even as outmoded at times. Many are suffering, and they are putting forth any effort they can to earn a livable wage. They do not need to be humiliated further by faceless factotums who treat them as expendable. Decades ago, Linda Loman, Willy's wife in Arthur Miller's Death of a Salesman cried out in frustration when her husband was being disregarded in the work place. She said, "He's a human being, and a terrible thing is happening to him....Attention, attention must finally be paid to such a person." At one time, I found those words to be overly dramatic and hyperbolic. Now, nearly 65 years later, in this place and time, Miller seems downright prescient. Shame on us who have allowed this to come true.
Posted by Pat Rocchi at 6:21 PM 5 comments: Links to this post