Talking to 9th Graders About Careers? Not So Easy, But Rewarding Nonetheless 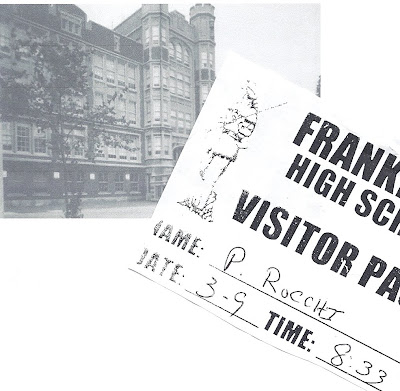 About six weeks ago, I heard from Carolyn Geers, Programs and Community Affairs Coordinator for Philadelphia Children’s Foundation (PCF). She had received my name through my Temple University MBA Alumni Association. It seemed that PCF has Guest Speakers program, and it's designed to expand students’ awareness of their career choices awareness. "By hearing from local working adults, the eyes of Philadelphia students will be opened to the variety of options available to them." Ms. Geers told me. Additionally, the program will inform students of what is required in education andexperience to become successful in a particular career. Ultimately, PCF is designed to exposing students to people, places, and occupations outside of their neighborhood to prepare for a successful future.

I agreed to speak to a 9th grade English class at Frankford High School, which is in the northeast part of the city. My topic was careers in corporate communications. What sealed the deal was that they were able to support my audio-visual needs, because no self-respecting speaker will appear without PowerPoint. (Working without PowerPoint leaves you vulnerable and exposes all your weaknesses, like Angelina Jolie without makeup.I kid, of course; in this case, I wanted PowerPoint as a crutch.) So we were set.

I showed up around 8:30 for the 9:00 a.m presentation, which was important since I and all the students needed to go through the scanning device. (What did I know? I haven't been in a city high school for decades!)

When I made it to the room, the kids barely acknowledged me, though I believe that it was largely due to shyness rather than rudeness, unfamiliarity with social graces rather than gracelessness. There was one exception. His name was Khalid. When he saw me setting up my little video camera, he got out of his seat, came back and introduced himself like a gentleman, offering me his hand. Don't think that this young man was a modern-day Arnold Horshack. He was obviously pretty cool, polished and taking charge of his life. I'm sure his lunch table is the place to be, and I can already picture him going far in this world.

After a brief introduction, I asked them all if they would like a job where they could give speeches? (Little interest.) Make movies or videos? (Hm, a smattering of enthusiasm.) Work on Facebook and Twitter during the day? Write advertisements? (Blank stares, which took me by surprise. I guess they couldn't imaging doing those things for a living.)

"How would you like a job where you could be on television, on the radio or in the newspapers?" Hands shot up! Being famous really appealed to this group.
I welcomed them to the world of corporate communications. I told them that businesses and other organizations to get their messages out, both the on the outside and the inside. I gave them lots of examples of how the work could be done: Public relations. Marketing. Advertising. Social Media. (However, I was a little presumptuous about what young people would know. They didn't understand the term "social media." To them, media are their music files and nothing more. One guessed that "social media are when people like the music that you make, and they stand around and listen to it." Sorry, he did not win the Samsonite luggage for that guess.)
I emphasized strongly that if they wanted to bring their 9th grade English to the working world that they needed to learn not only to write And communicate, but also about the business world and what motivates others. I advised them that they could learn this by studying English, journalism, and study the liberal arts. (Another explanation: They liked the idea that instead of studying one topic that they could become knowledgeable in many topics!) I emphasized most strongly that it is important to learn the basics of proper English, including sentence structure, the parts of speech and grammar.

Jameer and I talked about Twitter. I told him that people would know who he was from his Tweets. ("Once you succeeded because of what you knew," I advised. "Then it was because of WHO you knew. Today it is because of WHO knows YOU.")
There weren't too many questions; the shyness continued. The teachers in the room brought up some topics that kept the conversation going. Then I closed with pictures of people who achieved their goals through effective, even great, communication. I talked about how Steve Jobs sold innovation to the American people. I discussed how Dr. Martin Luther King changed society with his messages. (I encouraged them to read more than his "I've got a Dream" speech.) I reminded them of how Barack Obama used strong speaking skills to win the Presidency, most improbably.
And they laughed when I said that I think one of the greatest communicators and marketers right now is Lady Gaga, with her ability to get people to notice her. (They were probably surprised that I even knew who she was.)

I was disappointed when I was done. Their indifference was what I expected, but I had hoped for more. But the three teachers disabused me of that notion. They said that the mere fact that the students were quiet, not disruptive and not talking to their classmates was evidence that they were listening. In fact, the evaluation forms showed that the kids actually liked the presentation. They appreciated that I told them which schools offer the programs that are pertinent to this vocation, and they liked actually seeing samples of corporate communications. (PowerPoint DOES work!)

I intend to do this again. I hope that I can make a difference to young people who may not otherwise be exposed to such career options. (I wished that I had exposure to communications professionals when I was in high school.) Most important, I believe that I gave them hope. Apparently, it was not so important that I told them HOW to enter this occupation as I told them that I believed that they could do it all. I also gave them my contact information so they could send me questions or request information if they want.

Luckily, there are many volunteers for PCF. If there is such a program in your own community, I encourage you to take part. We don't know what difference we can make in a young person's life. In the meantime, I am keeping my eye out for a couple of the kids I met today.

PS. If you are reading this in Philly and want to help, here are links to the program, check out "Philadelphia Children's Foundation" on Facebook.
Posted by Pat Rocchi at 4:14 PM 1 comment: Links to this post

Email ThisBlogThis!Share to TwitterShare to FacebookShare to Pinterest
Labels: Ruminations on My Own Speaking
Newer Posts Older Posts Home
Subscribe to: Posts (Atom)