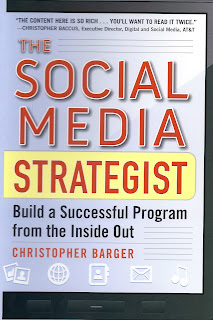 The social media are not even a decade old, as Christopher Barger points out in his book, The Social Media Strategist: Build a Successful Program from the Inside Out (McGraw-Hill). They are now part of any complete communication program and, simultaneously, a mythology has grown around them. Barger’s book serves as a worthy introduction to newcomers, covering a wide array of issues.

Barger lists several necessary steps to creating a winning social media program. Some examples: Find an executive champion in the organization to support your cause. Understand which part of the organization will own social media (marketing? IT? Human resources). Hire a strong social media evangelist who also has business savvy. Create well-defined metrics and use the right tools to measure them.

Barger is a realist who recognizes much of the hype around social media. Chief among them is the notion of transparency (defined here as ingenuousness in communication and accountability). Unlike so many others, he does not underestimate the inherent risks of such openness, writing, “As a PR rep for a major national brand has told me, ‘Our execs know that the critics are out there on the Web; they just don’t think we should provide them a platform to bash us.’”

Instead, Barger’s book is practical, advising the reader how to overcome many of the barriers a corporate program might face. He writes, “If you haven’t been inside a company or organization — if you don’t know corporate culture and bureaucracy, or have no experience navigating internal minefields — then you don’t know how to make social media work inside a company.” He suggests ways to gain effective internal converts to social media while also building the most strategic internal infrastructure. He also generously mentions many other social media consultants and thought leaders, which the reader may follow in the future to keep up with the most current philosophies.

Notably, Barger advises organizations that use social media to become content publishers, rather than just republishers of others’ information. He reminds social media practitioners to think about the content they publish in terms of its relevance to its audience.  “If you create great content, the social Web will do the work for you,”   he says. He also reminds the reader that the social media are two-way. Therefore, we should do our best to interact with the audience, letting them set the tone for a conversation. (Barger points out that social media have replaced the old “letters of compliant” from customers.)

In the latter part of book, Barger veers into philosophies of overall communication, such as events and media relations. I found that, rather than diluting the social media message of his book, he placed placing social media into its proper context as but one part of an overall program. One part that resonated particularly strongly with me was his advice on how social media can support crisis communication, and he does so with several well-chosen examples of PR disasters.

In general, I found this book important as a primer for the large number of people who are getting into social media for the first time.  As an early adopter of social media, I wish I had this advice. Barger helps communication professionals tap into the wisdom of the people who have worked in these media for a while with a comprehensive and easy-to-read handbook.
Posted by Pat Rocchi at 12:27 PM No comments: Links to this post

Email ThisBlogThis!Share to TwitterShare to FacebookShare to Pinterest
Labels: Getting Your Word Out, Media Matters

An aging film star falls only to rise again. A boy connects with the father he lost on September 11. A baseball manager makes his team more competitive in the most counter-intuitive way. And African American working women illuminate their lives simply by telling their stories.
Those are the stories of, respectively, The Artist, Extremely Loud & Incredibly Close, The Help and Moneyball – all films that were nominated as Best Picture at the 84th Annual Academy Awards, and they remind us how much we learn and remember from stories.

Of course, intuitively, we all know the importance of stories. After all, don’t we ask for stories when we are children? And when many summers pass, we are happy to share stories with children and others. We revel in stories, as they make facts and theories more personal, more relatable. We often tell of success through rags to riches tales. Also, think back to Hurricane Katrina. Most of us were not interested in how fast the winds were blowing at that time or the hour when the levees broke. No, we paid most of our attention to the individual accounts of how everyday people were affected by the storm.

We also want a story to unspool, with a beginning, a middle and an end that ties it together. Ernest Hemingway once famously wrote the story with just six words: “For sale: baby shoes, never worn.” It is said that Hemingway declared it his best work. But really, are we satisfied with that? Where are the characters, the setting, the plot line?

Whether we are speaking to large groups, a smaller department of only a few people, or one on one with a direct report, we can use stories to our advantage if we follow these tips:

In this video, Story Time, to a group of fellow speakers, I incorporated the elements above.  Take a moment to view it to understand how they all worked together.

After the Oscars have been handed out, think back to how this year’s winners got their awards. Also, remember the past winners. When you think back to the tales of a down-and-out Philadelphia boxer, a stuttering monarch, a doomed luxury liner, or the decades of a mobster family, you will remember that the story is paramount.
Posted by Pat Rocchi at 3:38 PM No comments: Links to this post

Email ThisBlogThis!Share to TwitterShare to FacebookShare to Pinterest
Labels: Getting Your Word Out, Ruminations on My Own Speaking, Tips on Speaking, Toast-matters
Newer Posts Older Posts Home
Subscribe to: Posts (Atom)