Marshall McLuhan at 100: The Media Are Still the Messages (and more) 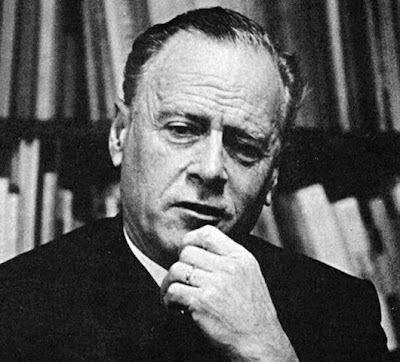 Today is the 100th anniversary of the birth of famed academician, philosopher and media observer Marshall McLuhan. In reflecting on his life, it is stunning to see how his influence and his relevance have only grown in this era of "The Social Network." Consider that McLuhan coined now-common phrases such as "the medium is the message, "information overload" and "hot and cool media" decades before we would understand their full significance.

Like many other future-oriented thinkers, such as H.G. Wells and Louis Mumford, Marshall McLuhan accurately predicted many events. For example, he believed that printed books would become obsolete, killed off by television and by other electronic information technology (e-books, anyone?). In War and Peace in the Global Village, he predicted that a coming, vast electronic network (read: the Internet) would recreate "the world in the image of a global village" (another McLuhan phrase that has entered our lexicon). And quite a village it is: When Time magazine proclaimed Mark Zuckerberg the 2010 Man of of the Year, they noted that Facebook users around the world comprised "a social entity almost twice as large as the U.S. If Facebook were a country it would be the third largest, behind only China and India."

Though he is somewhat forgotten today, McLuhan's popularity grew throughout the 1960s and 70s. His work was translated into more than 20 languages, he appeared in magazines across the world. Embraced by the counter-culture and acknowledged somewhat by the mainstream, McLuhan had an hour-long TV special on NBC in 1967, a Playboy interview in 1969, and an appearance on Rowan and Martin's Laugh-In, a cutting-edge TV show of the late 60s. However, McLuhan may be best remembered for his ironic cameo in Woody Allen's 1977 Oscar winner, Annie Hall, where Allen makes McLuhan appear magically just to settle an argument with a pedant in a movie queue.

McLuhan never claimed to be a crusader, and in fact, he never was. He was an observer and a documentarian. His various epigrams are testimony to this, and they have gained increased significance in today's media-encrusted world: McLuhan continued to influence even after his demise. In 1988, eight years after his death, his son published McLuhan’s Four Laws of Media. These questions resulted in the formulation of the following four laws of media, and how they affect us. Using cell phones as an example, here is how McLuhan's Laws manifest themselves: McLuhan found significance in the most mundane matters. For example, he could see how typography, with its specific variations of form and aesthetics, became forms of expression in themselves. Even print was not a monolithic medium to him.

So in this media-oriented world, where jeans have special pockets for iPods and the backpacks of most self-respecting kids are loaded with electronic gear, it is good to consider the visionary insights of Marshall McLuhan. His star grows ever so brightly, perhaps even directly proportional with the glow of display panels and their increasing influences on our lives and psyches.

Note: While I admire McLuhan greatly, I also direct you to this more critical article by Paul Seaman titled, "Marshall McLuhan: A Media Guru Reconsidered." While I don't agree with much of what Mr. Seaman has written, I appreciate his even-handed approach to McLuhan's legacy.
Posted by Pat Rocchi at 12:09 PM